RKO-Radio Pictures was created in 1928 with the merger of the KAO (Keith-Albee-Orpheum) theater chain and Joseph P. Kennedy's production company, Film Booking Offices (FBO).  The merger had been brought about by RCA which wished to get involved in the film business by providing sound for films.  RKO stood for Radio-Keith-Orpheum and Radio was added to the title as an acknowledgement of RCA's position as a major stockholder.

During the silent era, FBO had been responsible for several outstanding B-Western series starring Fred Thomson, Tom Tyler, and Bob Steele.  After leaving Fox, the most popular Western star of all, Tom Mix, joined FBO for his final series of silent Westerns.

Fred Thomson was a great all-round athlete and an ordained Presbyterian minister who became a superstar cowboy at FBO during the '20's.  In 1928, he stepped on a nail in his stables while tending his horses and he contracted tetanus.  His illness was wrongly diagnosed and he died on Christmas day that year.  He was 38-years-old.

After the creation of RKO, Tom Tyler and Bob Steele hit the independent trail at Poverty Row and Tom Mix signed with Universal to star in his first and only sound series.  After a pause in the action to allow the dust to settle, RKO embarked on a number of superior B-Western series.  The studio never produced as many Western series as B-Western factories such as Republic or Monogram, for example, or as many as the two second tier major studios, Columbia and Universal.  However, the RKO series that were produced were consistently better than any produced by any other studio.

Their first B-Western cowboy star was born George Duryea.  That moniker wasn't going to cut it and consequently he became Tom Keene.  Keene's tenure at RKO began in 1931 and ended in 1933 when the studio decided to discontinue its B-Western series.   Like Tyler and Steele before him, he hit the independent trail before eventually settling in at Monogram.


For two years after the Keene series ended, RKO produced no B-Western series.  Then in 1936, the studio re-entered the field with a series starring George O'Brien.

How good was this series?  When Don Miller wrote Hollywood Corral, his seminal study of the B-Western, he titled one chapter "How to Make Good Westerns: Fox, RKO and O'Brien."

During the silent era, O'Brien had been a popular leading man in prestigious  films produced by Fox, a few directed by John Ford.  In 1930, with the advent of sound he began starring in a quality B-Western series for the same studio.  When that series was terminated in 1935, he moved over to RKO and began another topnotch series. Because of the influential popularity of the Autry Westerns over at Republic, RKO felt obliged to add music and provide O'Brien with a comic sidekick.  Therefore, in some of the entries, Ray Whitley provided the music and the sidekick was often Chill Wills, who portrayed a character known as "Whopper."

O'Brien's tenure at RKO ended in 1940.  A member of the naval reserve, he was activated when the U.S. entered WWII.  Looking around for a new cowboy the RKO executives found one on their lot.  He was Tim Holt, the son of former silent film star, Jack Holt.  As a teenager, he had begun acting in films in 1937.  He even had a small role as a cavalry officer in John Ford's STAGECOACH (1939).  By that time, he had attracted RKO's attention and he had been cast in a number of that studio's films, including a couple of Westerns.

His series was inaugurated in 1940.  He would eventually star in more B-Westerns at RKO than any other actor and in the process he would become the cowboy most identified with that studio.

Holt possessed many of the necessary attributes needed by a cowboy star.  He was boyishly handsome, was an excellent horseman (in fact, a champion polo player), and a good athlete who could more than hold his own when it came to the action.  The problem was, however, that only 21-years-old when the series began, he looked even younger, more like a teenager than an adult.

That said, the series was supported by all the good production values that the studio provided for its B-Westerns and it proved to be popular with the juvenile audiences who were the primary fans of the genre. Don Miller even titled one of the other chapters in his book on B-Westerns, "...Or Anyway, Better Westerns Than Most: Keene, Holt & other guys at RKO."

As mentioned, the producers of the O'Brien series had added music and a comedy sidekick to some of the features.  The trend was continued with the Holts.  Ray Whitley would continue to provide the music, while the role of Whopper was given to Emmett Lynn, who always was more irritating than funny.  The role was later given to Lee "Lasses" White, which was only marginally an improvement.  Finally, Cliff Edwards, a much better actor than Lynn or White, was cast as a character known as Ike.  It was a marked improvement.

Holt's first series ended in 1943 when he entered the Air Force and flew missions as a bombardier in the Pacific theater.  The decorated veteran would be off the screen for four years.

With both O'Brien and Holt in the military serving their country, RKO produced no B-Westerns in 1944.  However, wishing to begin another series, the search was on for another cowboy.  Once again, their man was found right in their own backyard.

Robert Mitchum began his career as a heavy in the Hopalong Cassidy films, before eventually working his way up to good guy roles.  RKO took notice and cast him in several non-Westerns.  In 1945, the studio starred him in two Westerns, both based on Zane Grey stories.  In the first, NEVADA, he was given not one, but two sidekicks.  Neither was a singer and both were assets.

Guinn "Big Boy" Williams was always a welcome presence in a Western and maybe he wasn't able to provide brains but he was able to provide brawn as well as comedy.  Richard Martin portrayed the character of Chito Jose Gonzalez Bustamente Rafferty, the character that he would be closely identified with for the rest of his acting career.  Martin, without Williams, would fill the same role with the same characterization in WEST OF THE PECOS.  As it turned out, it would be Mitchum's final B-Western.

The same year that the two Westerns were released, RKO gave Mitchum an important role in William Wellman's WWII drama, THE STORY OF GI JOE, and a star was born.  There would be Westerns, but no more B-Westerns in the actor's future.

Enter James Warren.  He was no O'Brien, or Holt, or Mitchum, but he was as good as Tom Keene.  However, the studio seemed to be marking time by starring Warren in only three films, also based on Zane Grey stories, released over the course of three years.  Richard Martin was there for the first, but was replaced by John Laurenz in the Chito role in the other two.  It was a step back.

Perhaps what RKO was waiting on was the return of its young hero.  But the first role for Tim Holt after the war was an important supporting role as Virgil Earp in John Ford's MY DARLING CLEMENTINE (Fox, 1946).  Two years later, he would receive his best notices for his role as one of three gold seekers in Mexico in John Huston's THE TREASURE OF THE SIERRA MADRE (WB).  In between these two classic films, however, he had already begun a new series of B-Westerns at RKO.

Still only in his twenties, the war years had matured Holt and he looked more like what a sagebrush hero should look like.  Holt had the good fortune of inheriting Richard Martin as his sidekick.  Both were good actors who enjoyed an easy rapport on the screen with the happy result being one of the best hero-sidekick pairings that the B-Western genre ever produced.

The music was absent from these postwar films.  Furthermore, Holt's range wear tended toward plain boots and denim without any fringe or frill.  The stories contained enough action to satisfy the juvenile faithful while at the same time containing enough plot that even adults could enjoy them.  In addition, the black-and-white photography, often in the Alabama Hills near Lone Pine, California, was excellent.
Holt did adopt one affectation at the beginning of the series.  He wore two guns, but the left hand gun was turned butt forward.  Eventually, thank goodness, the gimmick was discarded.

The young males in the audience were probably thankful that Holt did not engage in much mushy romance.  That part of the plot was usually left to Chito, who was a cowboy Casanova.  That seemed to be more acceptable to the young male crowd, who would just as soon have had no romance in their Westerns.

Oddly enough, while the Holt character usually had a different name in each film, Martin was always Chito Rafferty.  It was only toward the end of the series that Holt's character became Tim Holt.  This is also one of the few series in which the sidekick was taller than the hero. 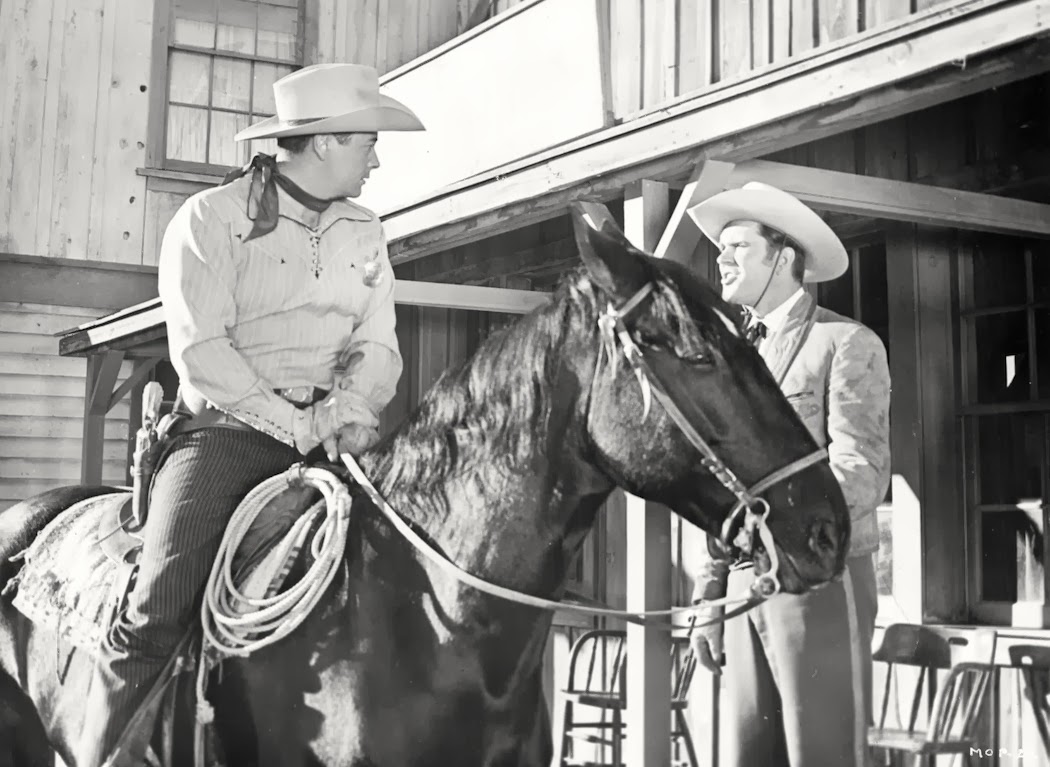 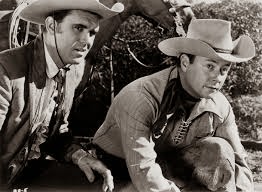 RKO's B-Western series, like those of other studios, could not overcome TV's competition in the early '50's.  Hoppy, Gene, and Roy had already ridden onto the small screen when, in 1952, Tim and Chito rode into the sunset for the last time.  And so ended what was one of the best B-Western series ever filmed and what many believe was the best of all the post-war series.

I need to add a final note.  In UNDER THE TONTO RIM (1947), a gent by the name of Richard Powers portrayed the leader of an outlaw gang.  Powers had been born George Duryea, but later changed his name to Tom Keene.  After his starring days ended, he changed it again and was often cast in supporting roles in RKO films.  In the final shoot-out, Tim was forced to shoot and kill the outlaw.  I wonder if anyone appreciated the irony that RKO's last cowboy hero had just killed the studio's first cowboy hero?