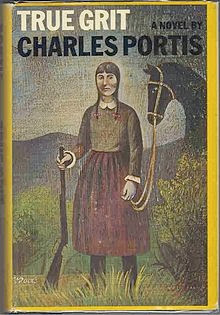 People do not give it credence that a fourteen-year-old girl could leave home and go off in the wintertime to avenge her father’s blood but it did not seem so strange then, although I will say it did not happen every day.  I was just fourteen years of age when a coward going by the name of Tom Chaney shot my father down in Fort Smith, Arkansas, and robbed him of his life and his horse and $150 in cash money plus two California gold pieces that he carried in his trouser band.

So begins Charles Portis’ 1968 novel, True Grit.  Mattie Ross, now a forty-year-old spinster, narrates the events that surrounded her quest to find and punish her father’s killer.  The opening passage demonstrates the deadpan quality of her narration as well as the detail in which she recounts her single-minded determination to achieve her goal no matter the obstacles that she will have to fight to overcome.

Chaney, after killing her father, fled to the Indian Territory (present-day Oklahoma) and joined up with the “Lucky” Ned Pepper gang.  Mattie realizes that she can’t travel alone into that treacherous territory and achieve her goal of bringing Chaney back to Fort Smith to stand trial in Judge Isaac Parker’s federal court for the Western District of Arkansas.  That court also has jurisdiction over any case in the territory that involves a white person who is either a victim or perpetrator.  Therefore, because the territory comes under federal jurisdiction, she sets out to hire the district’s meanest, toughest, orneriest U.S. deputy marshal to assist her.

She seeks advice on this matter from the local sheriff:

“Who is the best marshal they have?”

“The sheriff thought on it for a minute.  He said, ‘I would have to weigh that proposition.  There is near about two hundred of them.  I reckon William Waters is the best tracker.  He is a half-breed Comanche and it is something to see, watching him cast for sign.  The meanest one is Rooster Cogburn.  He is a pitiless man, double-tough, and fear don’t enter into his thinking.  He loves to pull a cork.  Now L.T. Quinn, he brings prisoners in alive.  He may let one get by now and then but he believes even the worst of men is entitled to a fair shake.  Also the court does not pay any fees for dead men.  Quinn is a good peace officer and a lay preacher to boot.  He will not plant evidence or abuse a prisoner.  He is straight as a string.  Yes, I will say Quinn is about the best they have.’”

Mattie isn’t looking for a good tracker, or a fair man, she is looking for a man with “true grit,” a characteristic that she admires and that which she personally possesses in full measure.  It turns out that Reuben J. “Rooster” Cogburn is a one-eyed, hard-drinking, ruthless, fat man of about forty who isn’t sure that he wants to work for Mattie, or, as he makes plain, any woman.  But after much verbal sparring between the two, Rooster’s reticence is overcome by Mattie’s agreement to pay him the hundred dollars he demands for taking on the job.  It is more than she wants to pay, but she compromises by promising to pay him fifty now and the other fifty after the mission is accomplished.

Matters become even more complicated when a Texas Ranger by the name of LaBoeuf (pronounced La-Beef) arrives in Fort Smith.  He is also on Chaney’s trail.  It seems that Chaney killed a state senator in Texas and that there is a sizable bounty on his head.  The marshal and the ranger decide to join forces and split the proceeds if they are able to capture – or kill – the fugitive.

“Anyhow, it sounds queer.  Five hundred dollars is mighty little for a man that killed a senator.”

“Bibbs was a little senator,” said LaBoeuf.  “They would not have put up anything except it would look bad.”

Neither of the lawmen wants a fourteen-year-old girl to tag along and they attempt to leave her behind, but they don’t know Mattie.  She will not be denied.  The three, at odds with each other, and with differing goals, ride into the territory in search of Tom Chaney.

Even if you have watched one or both of the movies based on the book, both of which are good adaptations, the book is still an enjoyable read.  It is unfortunate that the two successful movies have had the effect of shoving the book below the reading public’s radar screen.  However, the publisher did re-issue the book as a tie-in with the recent movie and therefore it is back in print and is no longer hard to locate. 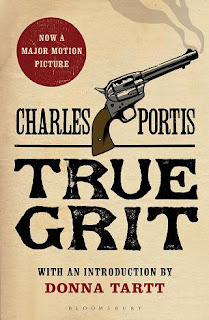 She does not mention any male members of her family being enamored with the book, and it is easy to see how this independent, bold, courageous, and yes, self-righteous and unaware young heroine would resonate with her and her female relatives.  Mattie is the star of the story, but she is ably assisted by Rooster and LaBeouf and there are enough thrills and adventures to appeal to readers regardless of gender or age.

One of the book’s many qualities is that it can be read on more than one level.  It can be approached as a coming-of-age story, or an adventure story, or a satire, or a story of redemption and loss of innocence, for it contains all these elements.  As Michael Cleary wrote in Twentieth Century Western Writers, “True Grit is … a curious amalgam of parody, formula, and myth.”  Cleary points out that Rooster, motivated by greed rather than justice, violates almost all perceptions of a Western hero.  “Portis overlays realism on the romantic world of the West.  [Therefore,] Rooster is not burdened by the moral introspection of a Virginian or Shane.”  Yet, in the end, his actions do rise to heroic proportions.

But Rooster meets his match when he tries to get the best of Mattie Ross.  Here we have two people who are willing to do whatever is necessary to achieve their goals.  But more times than not, it is Mattie who prevails.

Mattie is not only smart and stubborn, she believes that others should carry out her wishes.  Why?  Well, because her self-assurance tells her without reservation that it is the right thing to do.

Part of the appeal of the novel is that Mattie’s narration contains much deadpan humor.  However, she doesn’t know that.  She is unaware of how she sounds and, anyway, she wouldn’t care even if she did.

Here are a couple examples of her unintentional humor:

v “On his deathbed he asked for a priest and became a Catholic.  That was his wife’s religion.  It was his own business and none of mine.  If you had sentenced one hundred and sixty men to death and seen around eighty of them swing, then maybe at the last minute you would feel the need for some stronger medicine than the Methodists could make.”

v “You can expect that out of Federal people and to make it worse this was a Republican gang that cared nothing for the opinion of the good people of Arkansas who are Democrats.”

Portis was born and raised in southern Arkansas, was educated at the University of Arkansas, and has lived most of his life in the state.  That background allows him in True Grit to demonstrate his deep understanding of the people, place, and language of the time.  In a profile of Portis In the New York Times, Charles McGrath writes, Portis “doesn’t use e-mail, has an unlisted phone number, declines interview requests … and shuns photographs with the ardor of a fugitive in the witness protection program.”  Maybe that reluctance stems from the many years he spent as a reporter prior to becoming a full-time novelist and is aware of how interviewers sometimes misquote or misconstrue or otherwise distort the interviewee’s remarks.